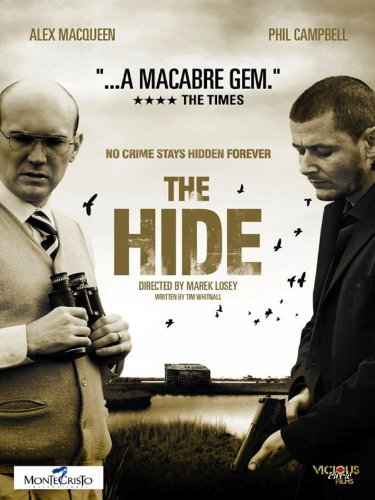 Well, you can imagine I would be interested in a movie called The Hide, right? The Hide is a British thriller starring Alex MacQueen and Phil Campbell. It seems to only be available in PAL/region 2 format. Bummer, because it sounds interesting:

On the windswept Suffolk mudflats creaks a bird-hide, inside which hovers Roy Tunt, a prematurely aged, mildly obsessive-compulsive birder. With one more sighting - the elusive sociable plover - he will have 'twitched' the entire British List. Tunt has his shortwave radio, packed-lunch and a portrait of his ex-wife Sandra for company. Suddenly, in the midst of a conversation with Sandra's portrait, the hide door blows open and a bedraggled stranger - unshaven, edgy and bloodied introduces himself as Dave John, a fugitive from the storm. After a tense introduction, the two men discover that they have a good deal in common, sharing sandwiches, tea and personal exchanges which are frank, poignant and often funny. As the two men begin to form a close bond news of a police manhunt sets them both on edge driving their fragile relationship to a tragic conclusion.

It seems this title is available streaming on Amazon, but not in the United States. Here's the trailer:

Have you seen The Hide? What did you think of it? Was Red-tailed Hawk one of the rare ticks found by the main character? Because it sure sounds like one in the trailer. ;)

Did you know that Hawaii "can rightly be called the bird extinction capital of the world"? 32 endemic bird species are federally listed as endangered. Please watch this excellent video produced by the American Bird Conservancy to learn more about bird life on Hawaii. The first third...

I Need A Wild Turkey!

I'm adding this to my wish list right now!!