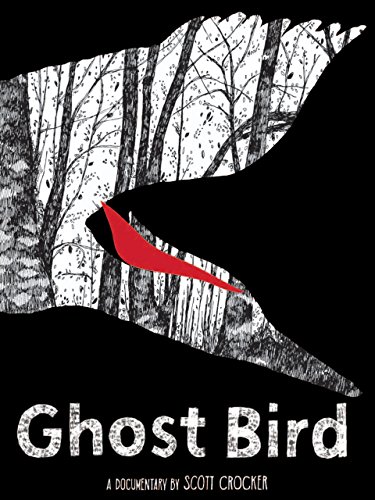 Back in September, Scott Crocker's Ghost Bird played at the Gene Siskel Film Center in Chicago, and Arthur and I went down to see it. The movie was pretty limited in its theatrical run, so if you didn't get a chance to see it, you're in luck because it comes out on DVD tomorrow.

Crocker's documentary follows the saga of the search for the (presumed extinct) Ivory-billed Woodpecker, and the frenzy that ensued after a video purported to capture an IBWO in flight was made public. According to the official website:

Ghost Bird is a feature length documentary about an extinct giant woodpecker, a small town In Arkansas hoping to reverse it misfortunes, and the tireless odyssey of the bird-watchers and scientists searching for the Holy Grail of birds, the elusive Ivory-billed woodpecker.

Promotional material for the movie made me think it would be primarily about the crazy changes that happened in and around Brinkley, Arkansas following the rediscovery. The movie does take a humorous (and ironic) tone when Brinkley is the focus, but the film tells so much more. Bird experts, ornithologists, museum curators, and others all weigh in on the controversy, and the tales they share are maddening, amazing, and fascinating.

Birders and non-birders alike will enjoy this well-made, informative and entertaining documentary. Whether you followed the 2004 Ivory-billed Woodpecker rediscovery story closely or not, check out Ghost Bird. I give Ghost Bird 5 Goldfinches out of 5.

Ghost Bird is available for streaming via Amazon. My review is based on a theatrical screening.

This video shows a beautiful American Kestrel wood carving by artist Lona Hymas-Smith. Click the gear icon to view in HD and then make the clip full screen to see the detail on this amazing work.

Bill Thompson III of Bird Watcher's Digest discusses a few bird titles in this cute little video, including the "Hamburger Helper for your field guide." To see what book he's talking about, watch below!