Netflix has been in the news a lot in the last couple of weeks, mostly because of the outrage they faced from customers after an announced price hike.

We're still happy with Netflix, although we'll probably switch to streaming-only before the price hike deadline. Since my post Netflix Instant Watch for birders last October, a few more titles which may be of interest have become available. Last time, I found four documentaries and one drama. This time, kooky-sounding dramas outnumber the documentaries 5 to 3. Note: the images are affiliate links to Amazon.com, where you can purchase the title. The text links go to Netflix.

John James Audubon: Drawn From Nature "This beautifully photographed documentary profiles the surprising life of John James Audubon, one of the foremost naturalists, artists and explorers of the 19th century. Audubon's stunningly vivid wildlife portraits are examined in detail. A self-taught artist, Audubon was also a showman who reveled in dramatizing his Wild West adventures when he toured European drawing rooms. Audubon's fierce promotion of conservation is also discussed."

The Real Macaw "When hard times fall upon gentle bird owner Ben Girdis (Jason Robards), his 149-year-old macaw, Mac, leads Girdis's teenage grandson, Sam (Jamie Croft), on a quest to a South Pacific island to track down treasure buried by the parrot's previous owner, a buccaneer. As medical bills are forcing Ben out of his home, Mac and Sam track down the spoils -- but a greedy archaeologist who has learned about the plan awaits to steal the riches for himself." This seems to be unavailable for purchase on DVD in North America, so Netflix might be your only chance to see this one.

Nature: Birds of the Gods "Deep within the rain forests of New Guinea live birds bearing almost impossibly beautiful plumage. Known as "birds of paradise," these creatures have inspired explorers and ornithologists for centuries. Renowned naturalist David Attenborough heads a team of scientists as they seek to film these elusive animals in their stunning natural habitat. Along the way we learn of their peculiar habits and elaborate mating rituals."

The Hawk is Dying "Auto upholsterer George Gattling (Paul Giamatti) searches for meaning in his life in Julian Goldberger's moving drama. An amateur falconer with a questionable track record, George manages to catch a magnificent hawk and is determined to train the wild bird, despite negative comments from his friends and family. Driven to succeed, Gattling refuses to give up, even in the face of tragic events. Michael Pitt and Michelle Williams co-star."

The Pigeon That Took Rome "American GIs MacDougall (Charlton Heston) and Contini (Harry Guardino) are undercover in Nazi-occupied Rome. When Contini falls in love with a rebel leader's daughter, the family prepares a celebration, but mistakenly serves all but one of the agents' carrier pigeons for the feast. To cover up the error, a family member replaces the flock with German pigeons -- which in turn bring MacDougall and Contini's messages straight back to the Nazis." This seems to be unavailable for purchase on DVD anywhere, so Netflix might be your only chance to see this one.

Birdemic: Shock & Terror "When sexy model Nathalie (Whitney Moore) and software guru Rod (Alan Bagh) head to a motel for an afternoon tryst, they are attacked by a flock of savage exploding eagles and other birds of prey in the first wave of an all-out avian war against humanity. As the lovers scramble to find food, water and safety, they team up with gun-toting campers to rescue a pair of orphaned kids. James Nguyen directs this low-budget indie thriller."

Ghost Bird "In 2004, a kayaker reported seeing a mysterious black-and-white bird in an Arkansas swamp. This alleged sighting of the ivory-billed woodpecker, thought to have been extinct for decades, sparked an explosion of interest in the elusive bird. This absorbing documentary chronicles the ensuing obsession that overtook legions of ornithologists and birdwatchers eager to glimpse this giant winged holy grail." I can highly recommend this one.

A Breed Apart "Vietnam vet Jim Malden (Rutger Hauer) shares a remote island with numerous rare bird species, whose survival he zealously protects. When climber Mike (Powers Boothe) pays the recluse a visit, he fails to mention that he's come to steal rare bald eagle eggs for a collector. As the men get to know each other, Walker hangs on to his secret, while Malden deepens his connection with Stella (Kathleen Turner), who runs a supply store on the mainland." This seems to be unavailable for purchase on DVD anywhere, so Netflix might be your only chance to see this one.

Have you seen any of these? I’ve only seen Ghost Bird and Birds of the Gods (both highly recommended); I hadn’t heard of any of the others except for Birdemic. I'm planning on watching that one with enhancement by Rifftrax. :)

This short promotional video does a good job of explaining how some birders use birding smartphone apps in the field.

Finally - a trailer!! Just over one month to The Big Year!

The film adaptation of Mark Obmascik's birding best-seller The Big Year is scheduled to hit cinemas on Friday, October 14th. And finally, today, we have a trailer! Check it out on the official The Big Year Movie website or just view below. 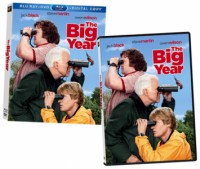 The Big Year will be coming out on DVD and Blu-ray in just a few weeks, on January 31st. I really enjoyed the movie both times I managed to see it... 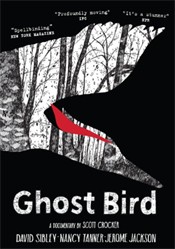 Back in September, Scott Crocker's Ghost Bird played at the Gene Siskel Film Center in Chicago, and Arthur and I went down to see it. The movie was pretty limited in its theatrical run, so if you didn't get a chance to see it, you're in luck because...